The TrickyScribe: We are living through the sixth great extinction in the history of our planet, and the first one that is directly caused by a form of life inhabiting it.

This form of life is us, the humans!

By putting profit first and environment last we have slowly but surely manipulated the biosphere to warm up so quickly and so significantly that by the year of 2050, 150 million people’s homes will be underwater, with hundreds of millions of others living with the persistent risk of flooding. The agricultural food output will decrease by an estimated 28%, forest fires, typhoons and droughts will rage endlessly creating more and more struggling refugees.

It does not take a genius to realize that if you put all the previous consequences of global warming in one, big, civilization calculator, you are left with disaster, with a high probability of extinction, and that is not the extinction of polar bears or koalas or rhinos, it is the extinction of us, me and you, and all of our children and their children too!

Global warming is not caused by rubbish directly, it is caused by the combustion of greenhouse gases, of which the most prominent one is carbon dioxide, of which concentration has now surpassed the shocking borderline of 400 parts per million in the atmosphere, which basically means that now climate change is inevitable, but we can still lower the effects to some extent and depending on our efforts this extent might just prove to be enough to prevent the death of billions. 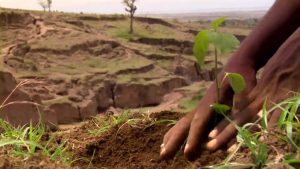 The solution lies with trees. Trees carry out a biological process called photosynthesis, which is the conversion of carbon dioxide and water into oxygen and glucose by the use of sunlight. If we plant enough trees and prevent enough deforestation we will be able to slow down the ever accelerating carbon dioxide concentration in the atmosphere and begin to reverse the process. We will not be able to re-freeze the melted ice of Greenland and both of the poles, but we will be able to prevent melting further.

The Afforestation Project is a not-for-profit organisation established by Filip Jastrzebski with the aim of co-operating with secondary school and college students to plant indigenous Irish trees all across Ireland (starting Dublin and Wicklow) and at the same time raising awareness about the issue of global warming worldwide.

Bill for Safety of Dams tabled in Lok...

Indian Monsoons to be “normal” again

Do we know Carbon Credit?